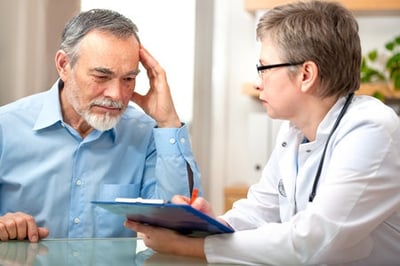 Radiation exposure has long been a potential risk associated with military service, primarily for individuals who performed what Veterans Affairs refers to as "radiation-risk activities" (as defined in 38 CFR 3.309(d)(3)), including nuclear weapons testing, but these specific tests are not the only potential risk for those serving in the military to be exposed to harmful radiation levels.

In order to file a VA Disability claim for cancer related to radiation exposure, a veteran would need to be able to prove a connection between their cancer diagnosis and radiation exposure during military service.

Proving service-connection for radiation-related cancers can be difficult and complex. The more information you have before moving forward, the better.

Let's take a closer look at what cancers are associated with radiation exposure during military service.

There's a difference between "presumptive diseases" and "diseases possibly caused by radiation exposure."

Veterans who spent their time in service participating in what the VA defines as "radiation-risk activities" (being present at nuclear test sites, for example, or involved in nuclear weapons testing) Veterans Affairs assumes, for the purposes of VA Disability, that certain cancers are related to military radiation exposure.

The VA refers to these cancers as "presumptive diseases", as they are presumed to be caused by their service.

Cancers that are considered "presumptive diseases" by the VA include:

Veterans exposed to radiation during service who develop these cancers do not have to prove a connection between the disease and their service to receive VA Disability. If the veteran has passed away as a result of the listed cancers, their survivors also may be eligible to receive survivors' benefits.

Are There Any Other Diseases Caused by Radiation Exposure During Military Service?

While the development of cancer is most often associated with exposure to radiation, there are other diseases recognized by Veterans Affairs as possibly caused by exposure to ionizing radiation during military service:

For diseases that the VA does not consider presumptively service-connected, eligibility for VA Disability benefits will depend on how much radiation the veteran received during his or her service, plus factors like the amount of time that passed between radiation exposure and development of the disease.

In these cases, the VA decides on eligibility for VA Disability on a case-by-case basis.

If you are attempting to prove that radiation was instrumental in the development of a disease not listed here, you'll need establish that it is at least as likely as not that your disease was caused by exposure to radiation during military service.

ALS, also known as Lou Gehrig's Disease, is a progressive neurodegenerative disease that affects the nerve cells in the brain and spinal cord. It is currently incurable, and for reasons currently unknown, individuals who have served in the military are twice as likely to develop ALS.

Anyone who have served in the military who develops Lou Gehrig's Disease may file for VA Disability with the knowledge that the VA considers ALS to be a "presumptive disease" for all veterans who served 90 or more days of continuous active military service.

While the development of ALS is not directly related to radiation exposure, veterans who are diagnosed with ALS may file for VA Disability benefits.

Have You Developed a Disease as a Result of Military Radiation Exposure?

Whether you're in the early stages of filing for VA Disability benefits, you've had your initial VA Disability claim denied, or you think the VA's decision was in some way incorrect, you deserve to have a legal representative with experience in VA Disability by your side.

At Bluestein Attorneys, our SC Veterans' Advocates team is entirely staffed by attorneys who have served in the military ourselves, so we understand the unique strain and pressure of military life.

To request your FREE VA Disability consultation, contact us by phone at (803) 674-8820 or contact us online at any time.