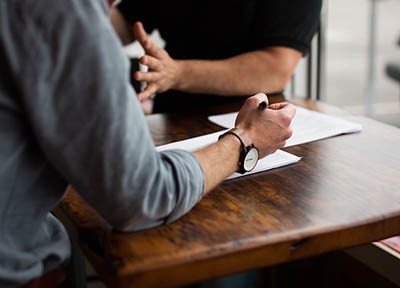 Last week's post, "Can Mediation Help You Avoid Going to Trial?", went over the basics of the mediation process and how it can benefit those looking to avoid going before a judge or jury in a courtroom.

Today, we're going to take a closer look into two types of case resolution— direct negotiation and assisted mediation — how they differ, and how to know which process may work better in your unique situation.

Lawsuit mediation is quite often ordered by the court during a lawsuit's early stages. Even if you are certain that your particular situation will end in court, it's worth taking the time to familiarize yourself with this particular tool, to ensure you have all the information you need before moving forward.

What is Direct Negotiation?

Direct negotiation is most often beneficial in a case where you and the other party wish to uphold a generally positive relationship even after the situation is resolved. This often involves a direct offer to compromise — the at-fault party offering to cover the costs of medical treatment in the case of injury resulting from a dog bite, for example.

Offers of compromise brought up directly like this tend to be very effective, but may involve complexities like the at-fault party agreeing to provide compensation but not to admit legal guilt, settling for an amount of compensation different from the original amount named, or other resolutions.

If you're interested in attempting direct negotiation, check with a legal representative about your situation. They'll be able to walk you through potential legal ramifications of various compromise offers before any agreement is made.

A simple conversation with the other party does not mean you cannot sue for a greater amount later, if required, but you shouldn't sign anything without consulting a legal representative.

When is Direct Negotiation a Bad Idea?

We would say that attempting direct negotiation is never a bad first option, as long as you do so carefully, but you will need to take several factors into account when it comes to whether or not mediation through direct negotiation will be effective for you:

It's natural to want to consider the financial aspects of a settlement or a compromise first. You may find, however, that financial concerns end up less important to you than an admission of guilt, or another potential result.

It's essential to have a good idea of what kind of resolution you are seeking, what you will accept, and what steps you expect to be taken after negotiations end before you ever agree to meet with the other party.

What is Assisted Mediation?

Assisted mediation generally involves both parties sitting down with a trained mediator or another third party to attempt to resolve the dispute.

The upside to assisted mediation is that it may end up costing far less than a full lawsuit or court case would. With a successful settlement and resolution, you may be able to avoid court costs entirely.

If mediation fails and you end up having to escalate to filing for a lawsuit, you could end up paying more.

Remember: mediation is usually ordered by the court during the lawsuit process. Having gone through mediation prior to filing your case may allow you to skip over the court-ordered mediation process, which could end up saving you on costs as well.

The Most Important Mediation Advice: Get It In Writing

While we'd like to really emphasize this advice in reference to direct negotiation (when you sit down with the other party and attempt to work out a compromise directly), it is no less essential in any form of mediation: get the compromise or settlement in writing, and have it looked over by an attorney or legal representative.

Writing everything down also allows both parties to get a better look at everything that is discussed or agreed to, so everyone has more clarity at the end of the process and the formal settlement documents are drafted.

Before signing any document, speak with a legal representative to ensure that terms are fair for both parties and to lend the document as much legal weight as possible.

Mediation is a tried-and-true tactic for those looking to avoid the costs of filing a lawsuit. Our own Marti Bluestein and Allison Sullivan are trained and certified mediators, with experience working alongside both individuals seeking resolution in civil litigation matters as well as Workers' Compensation.

We'd be happy to speak with you about your unique situation and help you decide what step to take next. Reach us by phone at (803) 779-7599 or contact us online at any time to request your free consultation.